Recipe: French Regional Breads by Mouette Barboff as brought to us by Elle: Feeding My Enthusiasams
Yield: 1 or 2 loaves 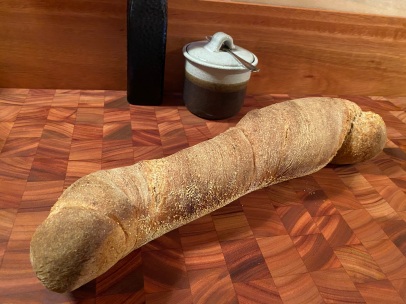 Kitchen of the Month Elle from Feeding My Enthusiasms, raised an incredible amount of comment this month, interest, confusion and for me my first ever real experience into making a real effort to understand baker’s percentage.  Why was that you might ask?  Because this is a book written by and I believe a professional baker for professional and commercial bakeries.  When I read 10 kg of strong white bread flour I was stopped dead. There is no container in my kitchen that is going to hold 22 pounds of flour. I didn’t even bother to try to add the water into that container that didn’t exist. Elizabeth thought she could put it in her bath tub but there would be protest from her mate. We have a shower, no tub yet. Hence, baker’s percentages to make this a reasonable recipe for Babes.  The enthralling aspect of this recipe is the shape. In the book, it looks like to lovers wrapped around each other. What could be more romantic for Valentines, the month of February and the Babe’s 12th anniversary!  None of my three loaves ever came out looking anything like two lovers BUT all three bakes were magnificent loaves!  This is great bread.
I never did get around to baking this with just white flour. I try to bake with whole grains and we were both really captivated when I used the sprouted wheat and then the rye. 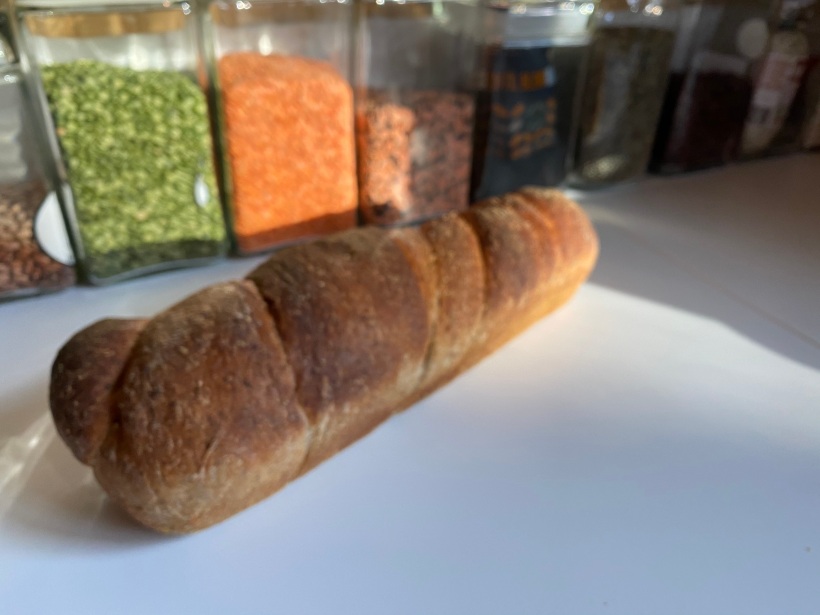 1. Mix flour(s), yeast, water, and diastatic malt powder (if using) in a large bowl.
When well mixed, allow 10 to 20 minutes for the flour(s) to absorb the water.

2. When well mixed and after resting those 10 to 20 minutes, add in the fermented/starter dough. The dough should be rather firm in order to hold its shape when shaped.
Knead for several minutes until the two doughs are well blended.
Pour salt on the counter and knead into the dough.

4. Depending upon how much flour used, you may have dough for only one loaf.
My first bake produced dough weighing 1050 grams which I divided into two loaves about 10 inches long.  I felt they were too fat and not long enough. But they were delicious and both of us loved the sprouted wheat used, really lends a lovely aroma.
My second and third bakes I made one loaf each bake.

5. Shaping Fold the dough twice across its wides part and then flatten gently with the flat of the hands into a rectangle about the length expected to be.
Lightly flour the dough.
I used my thinnest rolling pin the first two times but purchased a 3/4 inch dowel for the third (which is what I recommend).
Place the rolling pin/dowel in the middle of the dough and flatten the center creating two rolls.
Flour lightly and flip over. Flour 2nd side lightly and flatten again.
Lift one roll on top of the other so that the rolls are now side by side.
Roll/twist twice holding the dough tight. 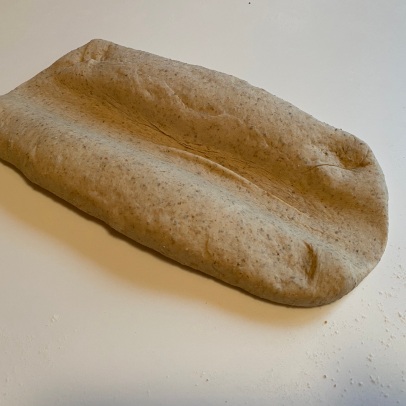 6. Place the twisted loaf on a couch, between two rolling pins in a plastic bag or in a clay baker with lid.
Cover and allow to rise/prove for an hour to hour 15 minutes.
Preheat the oven to 450° F(230° C)

7. Oven HOT Bake with steam.
The book says an 800 gram loaf bakes for 25 minutes and a 4 pound loaf for 40 minutes.
All three of my bakes were with whole grains therefore I bake them to an internal temperature of 205°F.

For my first bake I carefully I calculated the baker’s percentages … and then in a fleeting instant of inattention – allowed the scale to shut off – I only had 485 g bread flour and tried to figure what else I was going to use to get to 550 g that I had calculated … I crazily added 115 g sprouted wheat.  I obviously can not add under pressure. And only now realize my mistake as I see I added more flour than my calculation had called for.  I also ended up with 2 extra grams of diastatic malt powder in the flour and couldn’t really reasonably pull it out.

I am not really smart enough to tell you what my starter is. I suppose I should be embarrassed to tell you I used some left over dough from another bread using commercial yeast and started feeding it rye and whole wheat for about 5 days and felt like it got happy and that’s what I used. Hydration level … ha ha, no idea. So I’m no help knowing what Barboff means by fermented dough. The only clue I’ve seen is the fermented dough is from the previous days batch and the previous days batch might have been pain de campagne dough.  Practically speaking, “previous days batch” in my kitchen could have been any number of things, none of which would have proved useful.

I did use the 10 g salt and it seemed good. I think the malt got be really nice color and I will use the 5 g that got in by mistake on purpose next time. I’m going to use the diastatic malt powder more often as it does brown the crust so nicely.

For the first bake the dough weight was 1050 g and my 2 loaves weighted amazingly 525 each. Each loaf measured 10 inches long.

Second Bake: The loaf was 20 inches long and fit corner to corner on a sheet pan. Final rise was an hour 45 minutes.

Third Bake: When the dough was set to rise/prove for an hour … we ended up going into town … the dough went into the fridge for 3 hours and then sat out for two hours to come back to room temperature before I shaped it.  Shaped it went into a covered clay baker. I baked it at 450° covered for 15 minutes.
When I uncovered the loaf, I put the oven thermometer into the loaf and set it to alarm when the internal temperature reached 205°. I think that was another 20 minutes but I didn’t really watch. 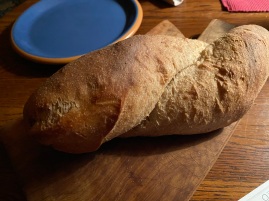 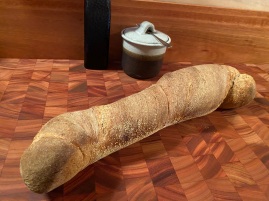 You’ll surely want to be a Buddy this month, these long, twisty breads are so delicious! Just make the  loaves (see Feeding My Enthusiasms), then email your link ( or email your photo and bit about your experience if you don’t have a blog) to plachman *at*sonic*dot*net and please add as your subject ‘BBBuddy’. I will send you a Buddy badge. Deadline? March 1.